UMBC’s Election Board officially announced the winners of the SGA Presidential and Executive Vice Presidential election just before 10 p.m. on Monday, April 27. Anthony Jankoski and running mate Daniel Amsini won the election with 1036, or 39.2 percent, votes. 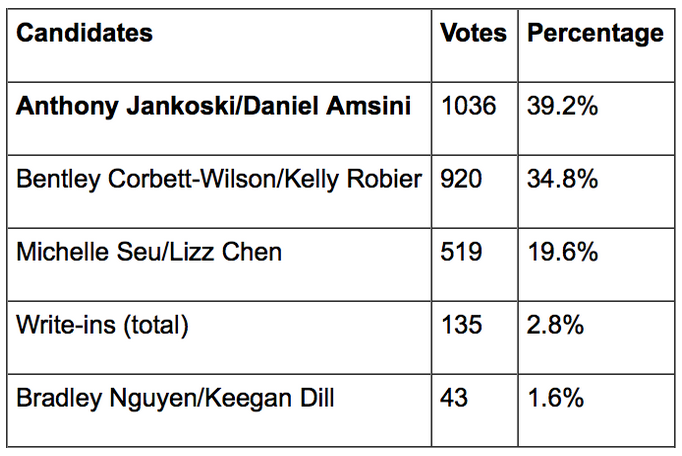 Over the course of the campaign season, the Election Board imposed sanctions for repeated election rules violations. All three presidential/executive vice-presidential campaigns committed infractions to some degree.

On April 23, the Election Board released an official notice saying the the Jankoski campaign was found in violation of election rule 10, which prohibits candidates and their campaign affiliates from soliciting votes with electronic devices. The Election Board determined that the proper sanction for these violations was a total ban of the Jankoski-Amsini campaign from the University Center and True Grits Dining Hall.

Evan Leiter-Mason, Election Board Chair, declined to comment on the results of the election.

Michelle Seu, who came in third in the election, said “I think that the distribution of the votes speaks volumes about what the students care about. We did our best to formulate respectable, realistic ideas for our platform, and we also put a great deal of effort into making sure we ran an ethically sound, fun and inviting campaign. If, at the end of the day, that was not enough to secure the popular vote, at least we can end this election knowing that we stayed true to ourselves and our vision.”

The other candidates could not be reached for comment.