Rock out with your lock out

Bike thefts are on the rise at UMBC once again, prompting the UMBC police to take action. On Aug. 24, a campus-wide crime alert was dispatched by the police department. The alert showed a large chart detailing the date, location and description of five bicycles that were stolen on Aug. 23. 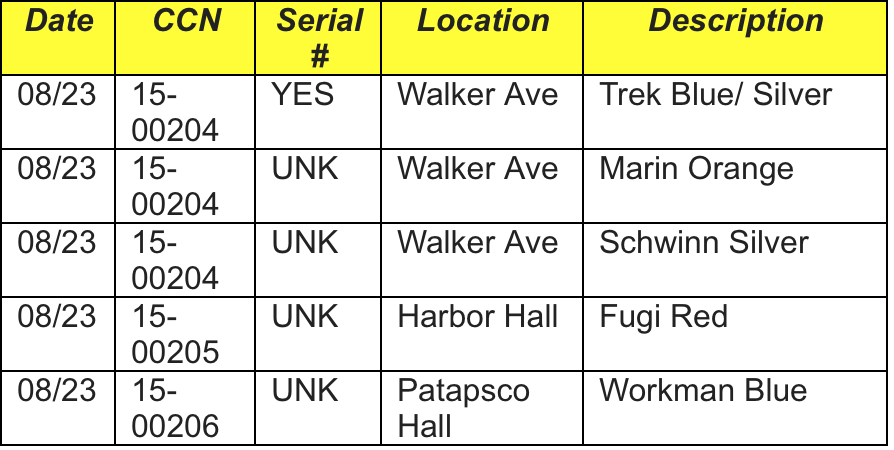 The crime alert was almost exactly the same as one sent out exactly a year ago, in which UMBC police informed the campus that five bikes had been stolen in the past month.

Paul Dillon, UMBC’s Deputy Chief of Police, said, “last year, we made seven or eight arrests in connection with bike thefts. We are experiencing a spate [of thefts] now … we need to do the same thing to find the group that’s committing these thefts.”

Dillon noted that the police department made a push in the last few days to register as many on-campus bikes as possible, and instruct students in proper locking techniques. “That’s the most important interaction on our end, telling students how to lock the bikes, what type of lock to get and so on,” he said.

Dillon said that the people who commit the thefts are, “usually a group of juveniles who come into campus from outside. They’ll come onto campus, steal the bikes, then go and sell them on the street for $20-$50.”

In the crime alert, the UMBC police provided a list of good practices for bikes owners:

Dillon encouraged students to “be our eyes and ears. Last year, a student saw some kids that looked out of place hanging around a bike rack and called us. Our officers found tools on them and made arrests. If you see anything, dont hesistate to call us.”