Are humanities a priority at UMBC? Faculty, students and data give conflicting answers 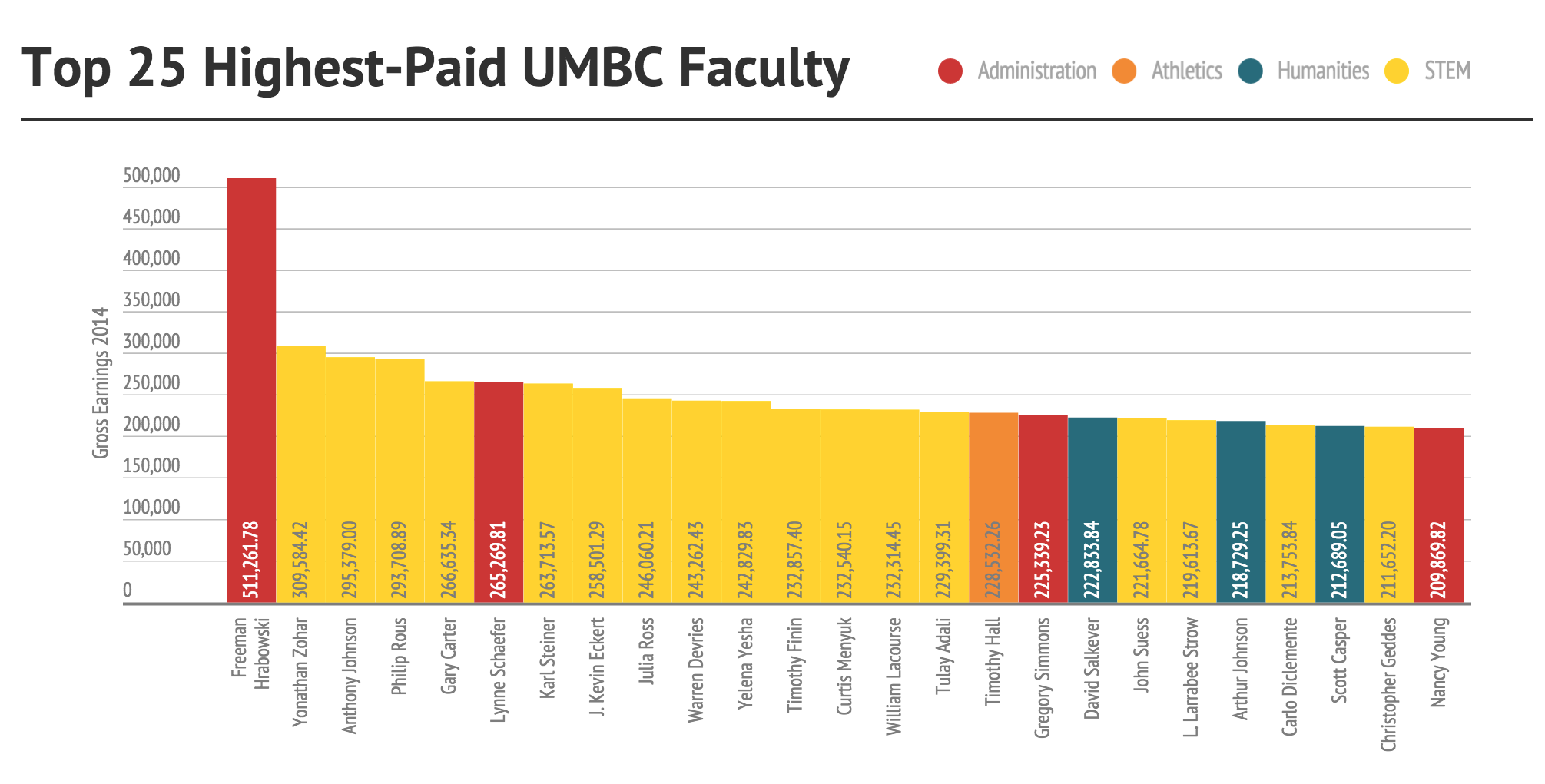 At the top of UMBC’s hill, there sits a brand new building like a monarch atop a throne. This beacon of the arts glows silver as it catches the sunlight. Inside, its state of the art classrooms offer students amenities that the basement of the Math/Psych building never gave them.

For many, this grand new building is a tangible, brick and mortar (and aluminum) sign that UMBC values the arts and humanities. The time and money poured into its construction are proof of UMBC’s commitment to the softer fields of study.

Shiny new building aside, are the humanities a priority at UMBC? In short, not everyone’s convinced.

“UMBC is more of a STEM school than a liberal arts college,” said Kathryn Flynn, junior graphic design and English major. “I think the emphasis is placed with the majority, which in this case is STEM, because that’s where the money is coming from, and that’s where it’s staying.”

The numbers are on Flynn’s side. According to public record data from 2014, of the 25 faculty who take home the biggest paychecks, only three come from humanities fields. Those in STEM fields make up a much larger portion of the highest-paid faculty on campus.

Expanding our focus, STEM faculty account for 63 of the 100 highest-paid individuals, whereas only 14 of the top 100 represent the humanities.

This is fairly consistent with national averages. According to a survey by the College and and University Professional Association for Human Resources, STEM faculty tend to receive much higher salaries. The survey collected averages of tenure-track professors at public institutions, and STEM professors are valued more highly outside of UMBC as well. For example, Engineering faculty make $99,578 on average, while Visual and Performing Arts faculty earn only $66,852. 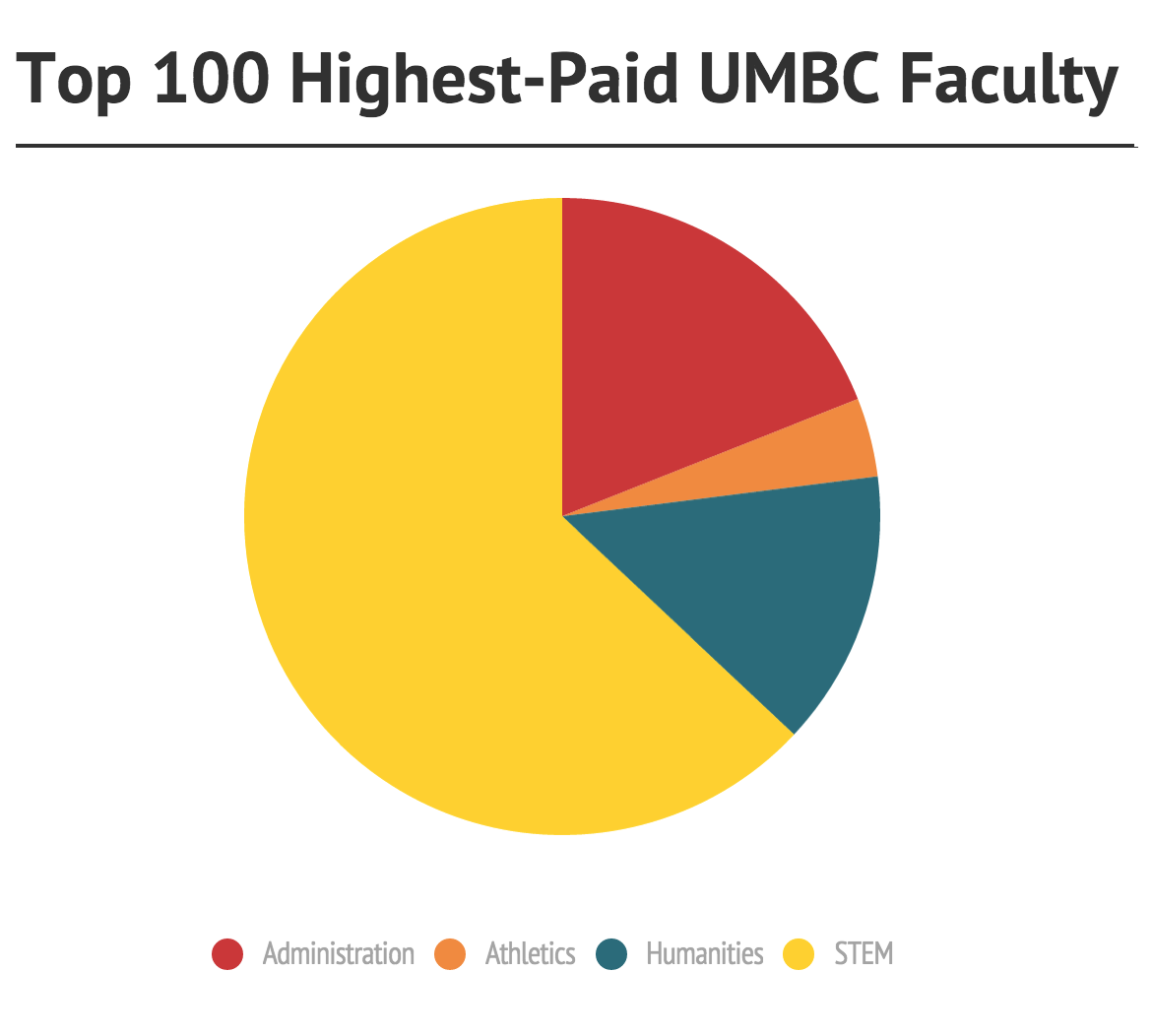 STEM faculty thus receive generally higher wages. At UMBC, it appears that the administration is willing to invest in STEM, administration, and even athletics before devoting funds to the arts.

In spite of this data, some humanities students do actually feel they are well represented and prioritized on campus.

“While UMBC is commonly portrayed as a school with excellent STEM programs, I think that UMBC’s true priority is innovation and research in all fields,” said senior English major Kelly Purtell.

“In my experience it is evident that UMBC has invested itself, both financially and administratively, in the improvement of the humanities programs, so as to bring them up to speed with its STEM programs,” said Purtell. She points to the willingness of faculty to collaborate and mentor students, as well as the “beautiful” Performing Arts and Humanities Building.

The faculty feeling is similar to Purtell’s opinion. Despite the general trend of higher salaries for STEM faculty, professors in the arts and humanities feel that UMBC is an environment where they, and their students, can thrive.

English department chair Orianne Smith, said, “I know that UMBC has a reputation as a university that is skewed towards STEM.” However, she feels this reputation does not match the reality. “I can attest to the fact that the university administration is proud of its talented, award-winning faculty in the humanities.”

Salaries aside, Smith argues that students have tangible evidence of the humanities’ importance. “Anyone who doubts that the humanities are appreciated at UMBC should go visit the Dresher Center for the Humanities… It is simply stunning.”

So, it seems that campus leadership is dedicated to the humanities. Other than the investment in the new Performing Arts building, though, the numbers do not support this notion. Despite the conviction that faculty hold, some students have yet to see the results.

With construction planned for the Interdisciplinary Life Sciences building, it remains to be seen if the humanities focus will remain, or if official focus will return to STEM.