A controlled burn of a game

Campo Santo’s debut game, “Firewatch,” pulls absolutely no punches. Thrusting protagonist Henry alone directly into the wilderness of the Wyoming Rockies, the game is atmospheric and emotional. The three-to-four hour game takes place over the length of a summer with different days acting as separate chapters, each taking place at a different time of day. Filled with hues of red, yellow, orange and green, the scenery is painted in with stylized sun rays.

The emptiness of the forest is a major plot point. The only human contact Henry has is radio contact with his supervisor, Delilah. Even wildlife is sparse, with only the odd turtle, raccoon or elk roaming around. This adds to the eerie and isolated setting immensely, and the increasing paranoia of both Henry and Delilah makes more sense when this is taken into account. This is mirrored by the ever-growing forest fire that eventually fills the entire screen with a hazy smoke, adding tension to the climactic scenes.

Despite being relatively devoid of life, the characters are the driving force of the game. Interactions between Delilah and Henry are witty and well-written. Delilah can – and often does – have a comment about anything Henry interacts with, to the point that the two are almost always speaking to one another. Their dialogue is simultaneously informative and entertaining, though it can be passive aggressive and abrasive depending on the player’s choices. The voice acting is very well done, making both characters very likable.

Though the narrative itself could easily be completed in a few short hours, the setting is so vast and unmarked 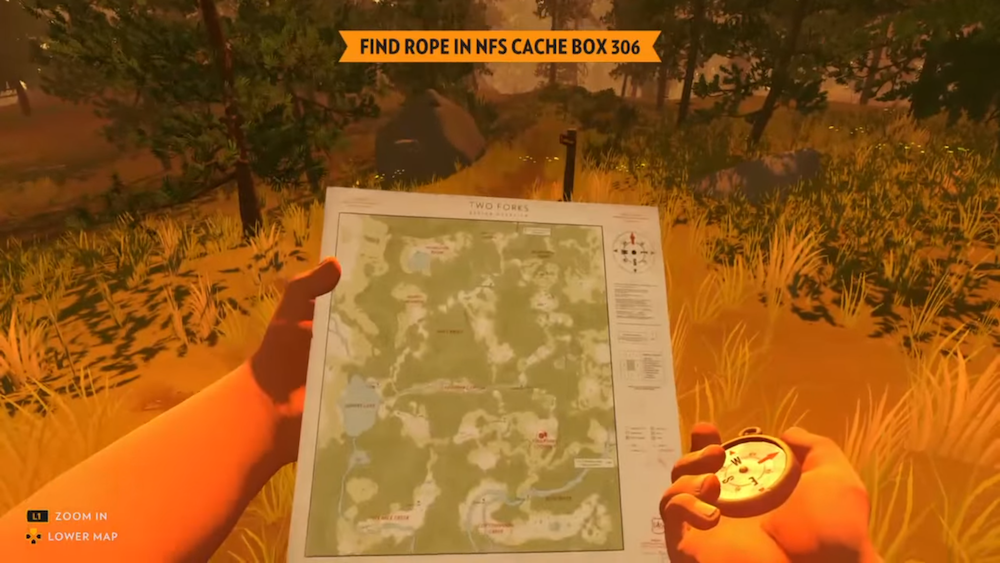 that it is easy to get lost. This prolongs certain scenarios, as players must make it from one end of the map to the other in order to progress in the story. A map and a compass are always on hand, and there are many landmarks and paths to aid in the journey, but for the more adventurous players who want to explore, it is very easy to get lost. A simple three-minute quest can take up 30 minutes as a result, but there is plenty to discover to make it worth the time.

In terms of narrative, the story is extremely anti-climatic. Culminating in an ending that proves the events of the story to be one big misunderstanding, everything that the player does throughout the game feels cheap and irrelevant, with a few exceptions. Meeting two teenagers illegally setting off fireworks in a national park with a high risk or wildfires results in nothing beyond a few throw-away lines, and an entire subplot of collecting evidence and stringing it all together leads nowhere. Even the players’ dialogue choices do not change the ending of the game.

This can be excused, however, by the sheer scope of the map and the seemingly endless things to be discovered. It is a game that is impossible to play the same way twice. There are different places to explore and different items to find, including a pet, a cutout figure of a cartoon park ranger, and countless books that can all be collected and stored in Henry’s watch tower. A lot of detail went in that can be missed at first, including the sound of someone following Henry at various points in the game.

“Firewatch” is a beautiful game with incredible writing and an attention to detail that cannot be understated. Filled with beautiful music and an endless map to be explored, there is plenty that will leave players coming back for more.